I’ve got my knitting mojo back! 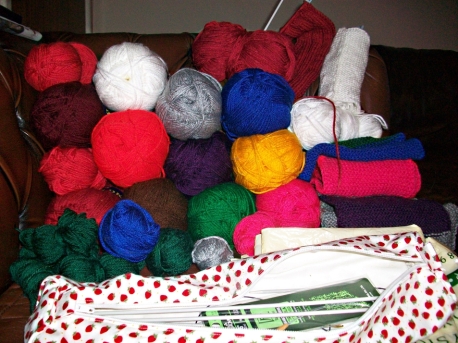 About a month after my last post about knitting I lost my knitting mojo for which I blame various things, but mostly a scarf going wrong and suddenly finding myself with too many things I had to finish by the end of the year. So, logically of course, I put it all in a bag in the cupboard and ignored it!

The scarf that went wrong didn’t technically go wrong nor was there anything particularly exciting about it, except that I was using two colours, however I didn’t think to check that two of the balls of wool had different dyes which was only obvious once I’d knitted more than half of a long scarf!

I picked up knitting again a couple of weeks ago when I knitted a wristwarmer in the space of an evening after having spent hours on a scarf before and unravelling it. Moving on from that I unraveled a started scarf for my friend and started it again with a different pattern though again nothing exciting nor advanced. Since then things have gotten a little bit crazy. I’ve nearly completed a basic red scarf for myself and another two coloured knit/purl one in red/purple. Pictures of those will follow in the next post, but I’m very excited I managed to keep it up with a pattern, loose knitting and two colours!

Most importantly, however, is that I’ve made a start with the blanket I’m planning and that I’ve mentioned in the last post. The blanket will consist of 80 [8×10] squares each with 30 stitches and 60 rows in a basic stitch [I believe it’s called stocking stitch?]. Having timed myself I seem to spend about 1.5 hours on each square which adds up to about 120 hours in total. The worst will be the sewing together though for which I’m estimating another 20 hours on top though I’m sure I’m deluding myself about that. 140 hours is a lot of time, but it’s not something I’ll be doing continuously. In the last four days I’ve knitted four squares and other things, too, so it’ll just be a case of filling time or taking it to places seeing it doesn’t involve much counting. Only 76 squares to go!

My knitting appears to have improved vastly, too. It’s become much neater and more evenly and I’ve experimented a little with knitting more loosely and mixing knit and purl stitches.

I’ve also been looking into local knitting groups. I’ve been to a weekly one twice now, but I’m not yet sure it’s the right fit for me. There are a variety of groups in the area and I’m sure I’ll be trying out some more soon.

The below are a few pictures of various knitting things I’ve taken in the past few months. They’re also posted on my tumblr using the knitting tag and over on my knitting page here. Cause, you know, I like being able to find things easily!

This entry was posted in #rdg, Knitting. Bookmark the permalink.

4 Responses to I’ve got my knitting mojo back!

Want to leave me a lovely comment? Please do! Cancel reply